You are here: Home /Cars for sale /Brands /mercedes-benz For Sale

Browse all Mercedes-Benz for sale Where to start?! The SLS has been developed entirely in house. And by ‘in house’, Mercedes actually means the tuning firm AMG, which became an of... Mercedes-Benz is a division of company Daimler AG, with their headquarters based in Stuttgart, Germany.

The company founded in 1926 by owners Karl Benz and Gottlieb Daimler. It was Benz’s 1886 Motorwagon which is reported to have been the first gasoline-powered car.

But it was Daimler’s influence as to where the logo came from. In the 1870s, Daimler sent his wife Emma a postcard, marking his residence with a three-pointed star and writing: "One day this star will shine over our triumphant factories". The three-pointed star made its first appearance in 1910.

To this day, Mercedes-Benz is one of the market leaders for cars, trucks, buses and luxury vehicles, as well as a big player in the world of motorsport.

In 1954 and 1955 they took part in their first Formula One Championship and both times won titles for Juan-Manuel Fangio, considered by many to be the best F1 driver in history. These were to be the only two years they raced in Formula One until they returned to the sport in 1990 as an engine supplier to Team McLaren.

Once they returned to the sport in their own right as a team, notable drivers included seven-time Formula One Champion Michael Schumacher and to this day, four-time champion Lewis Hamilton. 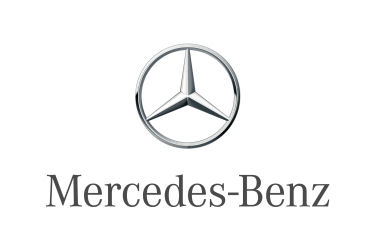 Find the Mercedes-Benz your looking for